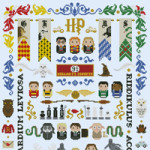 The definitive pattern for all the Harry Potter fans!
This pattern includes all the Harry Potter patterns available in the shop, plus a lot of new amazing and funny things! You will find all the seven books/movies in chronological order, with a series of key characters and objects for each book!

On the top of the pattern you will find Harry, Ron and Hermione, surrounded by the Hogwarts Houses banners.
The, from the first book, Harry Potter and the Philosopher's Stone, the 9 3/4 platform sign and on the sides Hedwig and the Sorting Hat. Then the Qidditch captains and the Golden Snitch with two brooms and then the Wizard's Chess with the Philosopher's Stone.
From the second book, Harry Potter and the Chamber of Secrets, Moaning Myrtle, Draco Malfoy, Tom Riddle with his diary. Dobby the House Elf with the sock and the Basilisk.
From the third book, Harry Potter and the Prisoner of Azkaban, the Death Eaters, the Time Turner and Sirius Black with the Expecto Patronum spell and the Harry's parents with their Patronus.
Then all the main Hogwarts professors: Albus Dumbledore, Severus Snape, Horace Slughorn, Sybill Trelawney, Remus Lupin, Minerva McGonagall, Hagrid, Alastor "Mad Eye" Moody, Filius Flitwick, Pomona Sprout and Gilderoy Lockhart.
Then the Marauder's map with the Weasley twins Fred and George.
From the fourth book, Harry Potter and the Goblet of Fire, the Triwizard Tournament champions Viktor Krum, Fleur Delacour and Cedric Diggory with the cup and the three tasks icons (the dragon, the evil merpeople and the labyrinth).
From the fifth book, Harry Potter and the Order of the Phoenix, Dolores Umbridge and Gaza with the rules tables and some of the Dumbledore's Army students: Neville Longbottom, Luna Lovegood and Cho Chang.
Then the Weasleys Arthur, Molly, Bill, Charlie, Percy and Ginny (excluded Ron, Fred and George that are already in the pattern).
From the sixth book, Harry Potter and the Half-Blood Prince, Luna Lovegood's Spectrespecs glasses, a love potion with a caldron, the Opal necklace, the door of 12 Grimmauld Place, a lucky potion and some magical books with the Griffyndor sword.
And last but not least, from the seventh book, Harry Potter and the Deathly Hallows all the main villains, Severus Snape, Peter Pettigrew, Lucius Malfoy, Lord Voldemort, Bellatrix Lestrange, Fenrir Greybackand the seven Horcruxes (Diary of Tom Riddle, Peverell Ring, Slytherin Locket, Hufflepuff Cup, Ravenclaw Diadem, Harry himself and Nagini).

Finally, in the frame, the four corners represent the houses colors, then on the left side, an owl, Ron's jumper, a letter and a glass of butterbeer, and then a howler, an inkpot and Hermione's cat Crookshanks. On the right side, another owl, a chocolate frog, the Weasley's car and a magic wand, and then Scabbers, a box of Bertie Bott's Every Flavour Beans and Minerva McGonagall as a cat. 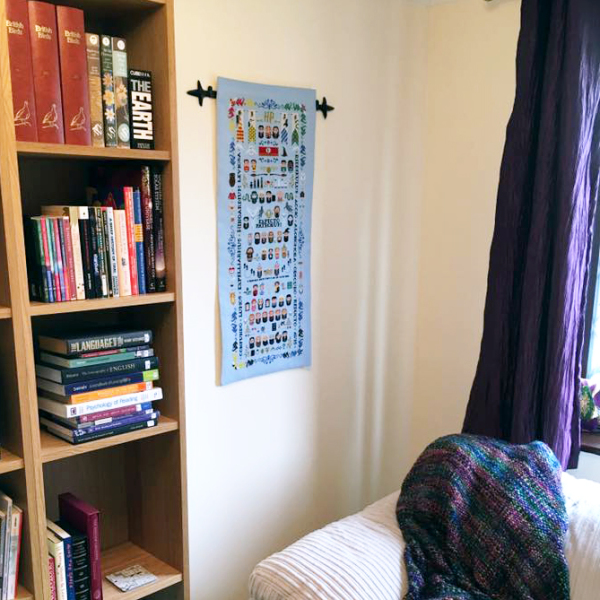 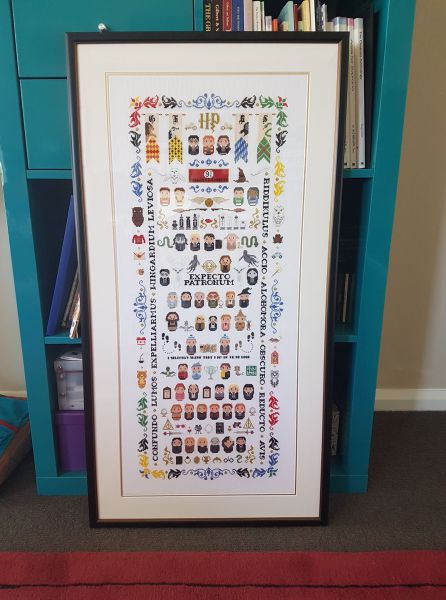 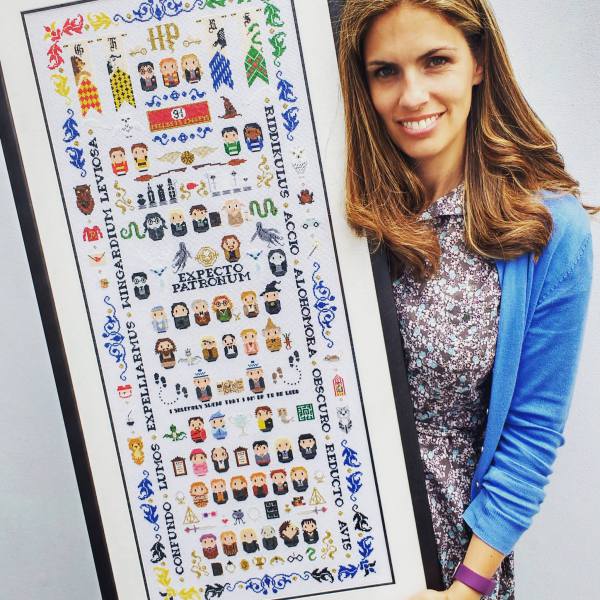