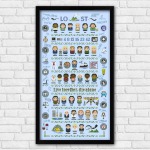 Were you a lost fan? Did you spent hours and hours looking for clues and symbols? If so, you can't miss this cross stitch pattern! It is an absolutely epic version that features all the main characters, some side characters and a lot of symbols, including all the Dharma logos, key objects, and a lot of Faraday's calculation. The main idea of this backstitched part, is to give the idea of all the guesswork, hint research and connection that Lost fans did during the show.


Let's see it in the detail!
On top: the Lost logo together with the falling airplane and the black smoke. On the backstitched details "#1 - The night I met you" from Charlie's list, Sawyer's assembled glasses and the Egyptian symbols of the countdown clock, on the other side "The numbers are bad" quote by Hurley and some notes from the Faraday's blackboard.

On the left border: "The Swan" Dharma vault , the compass that doesn't point to the north, "The Hidra"Dharma vault, the submarine, "The Arrow" Dharma vault, Locke's wheelchair, "The Lighthouse"Dharma vault, the good and bad balance from Jacob's cave, "The Orchid" Dharma vault and the bottle of wine straight and upside-down to represent good and evil.
Backstitched: 15, 42, 23 and 4 from the numbers series, "Flight 815", Locke's knife, some notes from the Faraday's blackboard, "Out of the book club" Ben's quote.

On the center:
Row 1: represents the six Oceanic survivors: Sayd with the radio, Kate, Jack with the weapons case key, Locke, Sun and Hurley with the Lottery ticket.
Row 2: represents the Swan Dharma vault with the computer, the 108 minutes countdown clock, the number series and TV with the Dharma Introduction Video.
Row 3: represents the survivors: Sawyer, Aaron with the crib built by Locke, Clair, Charlie with the Virgin statue, Jin, Boone and Shannon.
Row 4: represents the link between Desmond and the Island with the white bear, the four toed statue, "Not Penny's boat" Charlie's hand, Desmond, the boat with the elicopter and Faraday's note "If everything goes wrong Desmond Hume will be my constant".
Row 5: represents the other survivors: Vincent, Walt, Micheal, Rose, Bernard, Mr. Eko and Ana Lucia.
Row 6: maybe the key quote of Lost: "Live together, die alone", in a muddy and leaves style.
Row 7: represents the others: Rousseau, Juliet, Alex, Ben and the wheel.
Row 8: Eloise with the Pendulum, Faraday, Charlotte, then Horace and Linus from the Dharma initiative.
Row 9: represents the core of the island: the light cave, Richard, Jacob, and the man in black with the black smoke.

Like all the Cloudsfactory patter, this one includes:
- Cover page with image and pattern size on 14, 16 and 18 count
- Full color chart with symbols
- DMC and Anchor floss legend, number of skeins needed and backstitch detail
- Additional devices friendly pattern in a single page
- Stitching tips