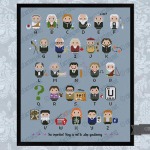 A new, unique and amazing Alphabet is now live in the shop. It includes a great selection of scientists, inventors and science related things!

The pattern is available in the shop in both versions with letters only or with the names. You will be able to download them both and choose later which one you prefer!

A = Archimedes (287-212 B.C.): anticipated modern calculus such the area of the circle and volume of the sphere. He formulated the Archimedes’ Principle, that states that a body immersed in a fluid experiences a buoyant force equal to the weight of the fluid it displaces.

B = Benjamin Franklin (1706-1790): he is known for his discoveries and theories regarding electricity.

C = Marie Skłodowska-Curie (1867-1934): she was the first woman to win a Nobel Prize, the first person (and only woman) to win twice, the only person to win twice in multiple science. She formuleted  the theory of radioactivity and discoved two elements: polonium and radium.

D = Charles Robert Darwin (1809 –1882):  known for his contributions to evolutionary theory, resulted from a process that he called natural selection, in which the struggle for existence has a similar effect to the artificial selection involved in selective breeding.

E = Albert Einstein (1879 – 1955): known in popular culture for his mass–energy equivalence formula E = mc2 (which has been dubbed "the world's most famous equation"). He received the 1921 Nobel Prize in Physics "for his services to theoretical physics, and especially for his discovery of the law of the photoelectric effect". The latter was pivotal in establishing quantum theory.

F = Sir Alexander Fleming (1881 – 1955): his best-known discoveries are the enzyme lysozyme  and the antibiotic substance penicillin

H =  Peter Higgs (1929 – Still living): best known for his 1960s proposal of broken symmetry in electroweak theory, explaining the origin of mass of elementary particles in general and of the W and Z bosons in particular. This so-called Higgs mechanism, which was proposed by several physicists besides Higgs at about the same time, predicts the existence of a new particle, the Higgs boson (which was often described as "the most sought-after particle in modern physics").

I = Sir Isaac Newton (1642 –1726/7): he formulated the laws of motion and universal gravitation, which dominated scientists' view of the physical universe for the next three centuries.

J = Johannes Gensfleisch zur Laden zum Gutenberg (1398 – 1468): His invention of mechanical movable type printing started the Printing Revolution and is widely regarded as the most important event of the modern period. It played a key role in the development of the Renaissance, Reformation, the Age of Enlightenment, and the Scientific revolution and laid the material basis for the modern knowledge-based economy and the spread of learning to the masses.

K = Johannes Kepler (1571 –1630): he is best known for his laws of planetary motion, based on his works Astronomia nova, Harmonices Mundi, and Epitome of Copernican Astronomy. These works also provided one of the foundations for Isaac Newton's theory of universal gravitation.

L = Louis Pasteur (1822 – 1895): renowned for his discoveries of the principles of vaccination, microbial fermentation and pasteurization. He is remembered for his remarkable breakthroughs in the causes and preventions of diseases, and his discoveries have saved countless lives ever since. He reduced mortality from puerperal fever, and created the first vaccines for rabies and anthrax. His medical discoveries provided direct support for the germ theory of disease and its application in clinical medicine. He is best known to the general public for his invention of the technique of treating milk and wine to stop bacterial contamination, a process now called pasteurization.

N = Nikola Tesla (1856 –1943): best known for his contributions to the design of the modern alternating current (AC) electricity supply system  and patented the Tesla coil.

O = Georg Simon Ohm (1789 –1854): using equipment of his own creation, Ohm found that there is a direct proportionality between the potential difference (voltage) applied across a conductor and the resultant electric current. This relationship is known as Ohm's law.

P = Pythagoras of Samos (570 – c.495 B.C.): great mathematician, mystic, and scientist and is best known for the Pythagorean theorem which bears his name.

Q = Questions: Einstein said “The important thing is not to stop questioning. Curiosity has its own reason for existing. One cannot help but be in awe when he contemplates the mysteries of eternity, of life, of the marvelous structure of reality. It is enough if one tries merely to comprehend a little of thismystery every day. Never lose a holy curiosity.”. Questions keeps science alive!

R = Ernő Rubik (Hungarian: (1944 – still living): architect and professor of architecture. He is best known for the invention of mechanical puzzles including Rubik's Cube. Rubik's Cube lends itself to the application of mathematical group theory, which has been helpful for deducing certain algorithms - in particular, those which have a commutator structure.

S = Erwin Rudolf Josef Alexander Schrödinger (1887 –1961) and Schrödinger's cat: Nobel Prize-winning Austrian physicist, he developed a number of fundamental results in the field of quantum theory, which formed the basis of wave mechanics. Schrödinger's cat is a thought experiment, sometimes described as a paradox, devised by Austrian physicist Erwin Schrödinger in 1935. It illustrates what he saw as the problem of the Copenhagen interpretation of quantum mechanics applied to everyday objects. The scenario presents a cat that may be both alive and dead, this state being tied to an earlier random event.

T = Alan Mathison Turing (1912 – 1954): British mathematician, logician, cryptanalyst, philosopher, computer scientist, mathematical biologist, and marathon and ultra distance runner. He was highly influential in the development of computer science, providing a formalisation of the concepts of "algorithm" and "computation" with the Turing machine, which can be considered a model of a general purpose computer. Turing is widely considered to be the father of theoretical computer science and artificial intelligence.

On 8 June 1954, Turing's cleaner found him dead. He had died the previous day. A post-mortem examination established that the cause of death was cyanide poisoning. When his body was discovered, an apple lay half-eaten beside his bed, and although the apple was not tested for cyanide,  it was speculated that this was the means by which a fatal dose was consumed. The logo of Apple Computer is often referred to as a tribute to Alan Turing, with the bite mark a reference to his death.

U = Uranium: a silvery-white metallic chemical element in the actinide series of the periodic table, with symbol U and atomic number 92. It has a key role in modern sciece.

V = Leonardo di ser Piero da Vinci (1452 – 1519):  painter, sculptor, architect, musician, mathematician, engineer, inventor, anatomist, geologist, cartographer, botanist, and writer. His genius, perhaps more than that of any other figure, epitomized the Renaissance humanist ideal. Leonardo has often been described as the archetype of the Renaissance Man, a man of "unquenchable curiosity" and "feverishly inventive imagination". He is widely considered to be one of the greatest painters of all time and perhaps the most diversely talented person ever to have lived.

W = Radio Waves: a type of electromagnetic radiation with wavelengths in the electromagnetic spectrum longer than infrared light. Radio waves were first predicted by mathematical work done in 1867 by Scottish mathematical physicist James Clerk Maxwell. Maxwell noticed wavelike properties of light and similarities in electrical and magnetic observations. He then proposed equations that described light waves and radio waves as waves of electromagnetism that travel in space, radiated by a charged particle as it undergoes acceleration. In 1887, Heinrich Hertz demonstrated the reality of Maxwell's electromagnetic waves by experimentally generating radio waves in his laboratory. Many inventions followed, making use of these 'Hertzian' waves to transfer information through space.

X = X-Ray: X-radiation (composed of X-rays) is a form of electromagnetic radiation. Since Röntgen's discovery that X-rays can identify bone structures, X-rays have been used for medical imaging. The first medical use was less than a month after his paper on the subject,[22] and up until 2010 5 billion medical imaging studies had been conducted worldwide.

Z = Mark Elliot Zuckerberg (1984 – still living): computer programmer and Internet entrepreneur. He is best known as one of five co-founders of the social networking website Facebook.