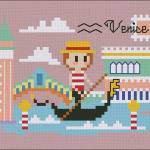 Postacards from the World SAL #1 - Venice

As many of you may know, it is a tradition for us to add an info sheet to every month pattern during our Stitch a Longs. During this year Stitch a Long, we will travel through the world stitching 12 super-cute postcards, so the infos will concern the buildings and the characters featured in every month's clue, plus some fun facts about the city!

The first stop in our 12 months trip is Venice, the city of water and romance! Venice has a long story that we will narrate you through its most iconic buildings: San Marco Campanile, Rialto bridge, the Doge's Palace, and of course a Gondola with a Gondolier... let's start our trip! San Marco Campanile: Piazza San Marco was constructed in the ninth century as a small square dotted with trees. The square was laid out in front of the original St. Mark's Basilica, at the time a small chapel which was part of the Doge's Palace. The square was separated from the palace by a small canal, the Rio Batario. Already a central gathering place for Venetians, the piazza was enlarged in 1174 after the canal and an adjoining dock were filled in. The centerpiece of the piazza is, of course, magnificent St. Mark's Basilica. Commissioned in 1071 by doge Domenico Contarini, this amazing church is built in Venetian-Byzantine style, a mixture of western and eastern styles.
The basilica has a separate campanile - bell tower - that stands 98.6 meters tall (323 ft) and is one of the city's most recognizable landmarks. Originally built in the ninth century, the current version was rebuilt in 1912 after the original tower collapsed in 1902.

Rialto Bridge: Probably the most visited and most photographed bridge in Venice, the Rialto Bridge (Ponte di Rialto) opened in 1591. For nearly three hundred years, it was the only way to cross the Grand Canal on foot. The bridge replaced various wooden bridges that had occupied the same location since the twelfth century.

Doge’s Palace: The Doge's Palace sits on a site that was once occupied by a 10th century wooden stockade with watch towers and moat and, later, another similar fort, both eventually destroyed by fire and other disasters.
By the fourteenth century, the hierarchy of Venice decided that a grand palace was needed, a building befitting the city's new wealth and power. Designs for the Doge's Palace were created by Filippo Calendario (who was later executed for treason in 1355) and work on the structure began.
Because of Calendario's death, the Palazzo Ducale was constructed in two phases. The eastern wing, which faces the Rio di Palazzo, was built between 1301 and 1340. The western wing, facing the Piazetta San Marco, took an additional 110 years to build and was completed in 1450. The architectural style is generally referred to as Venetian Gothic - a gothic structure with byzantine influences.

Gondola: Gondolas were once the chief form of transportation through the canals of Venice. Today, they are generally used as sightseeing vessels for tourists willing to shell out quite a few euros for a ride on these historic rowing boats.
Some experts believe gondolas date all the way back to the seventh century, but the most common belief is that they originated around 1100. Designed to deal with the shallows and mud flats of the canals, early gondolas had twelve oars. A few centuries later, they were much smaller in size but had acquired a "felze" or cabin. In the sixteenth century, they had become so covered with ornamentation that a law eventually banned such ostentatiousness. From that point on, and still today, the vessels were permitted to only include a curly tail, a pair of seahorses, and a multi-pronged prow.
Gondolas are built at one of just three remaining boatyards, of which the Squero di San Trovaso is the most famous. All gondolas are built in the same manner by experienced builders, they are composed of 280 separate pieces. The left side is longer than the right, which allows it to resist the tendency to turn to the left during a forward stroke by the gondolier.
Not everyone can be a gondolier. In Venice, it is considered a noble profession that has been passed down from generation to generation through the centuries.

Fun facts about Venice:
- Venice is known for its bridges. There are 417 bridges in Venice and 72 of those are private.
- According to Venetian tradition, the couple riding in gondola should kiss under each bridge and they will stay in love forever.
- Venice has one of the narrowest streets in the world. Calletta, or Ramo Varisco street, is only 53 cm wide.
- There are about 350 gondolas and 400 gondolieri in the city of Venice. On average, gondola is 11 meters long and it weights almost 600 kilos. Until recently, Venice didn’t have female gondoliers. Venice got its first female gondolier in 2010.
- Venice was not built directly on the surface of the islands, buildings are supported by wooden platforms. Venice is sinking at the rate of 1-2 millimeters a year.
- The first woman in the world that graduated was born in Venice in 1646.

On February first, we will continue our trip! Who knows where Cloudsfactory airlines will bring us! Can you guess?